It is with great sadness, we announce the passing of one of our own.  Robert Pluta and his son, Bobby Pluta, passed away Father’s Day weekend, while hiking in Carlsbad Caverns National Park. Robert was a retired Air Force Audiologist. 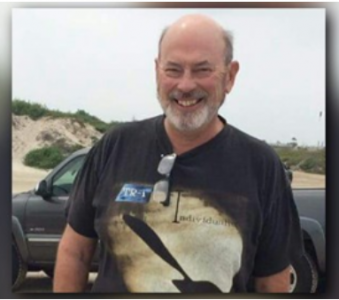 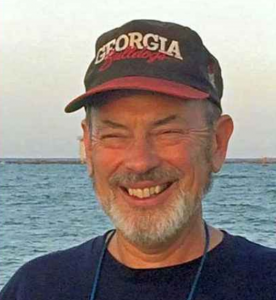 A fund has been set up to help Robert’s wife Lill and son Kip, donations of any amount will help.  If you would like to donate, please visit https://www.youcaring.com/lillianpluta-855927

A benefit fund has been established at the Navy / Army Credit Union.  Any branch will take donations for the name of Pluta, or they can be mailed to Lillian Pluta / Kristofer Pluta
4833 Saratoga Blvd. PMB 719
Corpus Christi, TX. 78413-2213

Members of the MAA community also want to share their tributes and they will be posted below as they are received.

Rob was a caring and kind, gentle man. He loved music, social media, Apple computers, nature, BBQ, his family and friends. We camped and hiked multiple times in Big Bend National Park. I’ll miss Rob saying, “RIGHT!” with a slightly British accent, usually while drinking a craft beer. He participated multiple times in a bike ride called The Hotter’N Hell Hundred, the race motto is, “if you’re going to ride 100 miles, it might as well be Hotter’N Hell!” Being a native of New Jersey he adopted Texas as his home but he always missed the East coast food, especially the deli items. He once packed a deli sandwich in his luggage after a visit to his folks in New Jersey, but the airlines lost the suitcase. It was several days before the luggage was returned, which by that time the sandwich had spoiled. I think he missed the sandwich more than any other content of that suitcase. There are many more stories I could tell about my friend, I will truly miss him and his son Bobby. Please keep Kay and Kip in your prayers.

What can I say about Rob?  He was a great friend with a big welcoming heart.

I remember my first years in the Air Force been so intimidating as I was by myself and it was the first time that I was away from my family.  I was trying to adjust not only because the Air Force was all new for me, but it was the first time that I was living in the United States, so I was learning about a different culture, with a different language, and at the same time I was adjusting to a new way of life; the military life.  But Rob was always kind to me.  I remembered going to his home for a BBQ.  To my surprise, there were not other guests. I was the only one there.  That was the first time I met Kay.  They just wanted me to feel welcome and not feelso alone.  I never forgot what we had for dinner that night; Grilled Tiger prawns!!!!  What a welcoming!

As a colleague, I have to say that Rob was always willing to help and share knowledge and experience. I enjoyed very much sharing “difficult” patients with him.  I loved to see Rob rolling his eyes back when patients showed at the front desk with unique “special” demands (of course he didn’t do the eye-rolling in front of them).

I used to tell Rob stories about my patients just to see his reactions such as; moving his head side to side with a deep sigh, and of course the eye-rolling!  His favorite was… “the patient is 30 minutes late”!

He was an amazing audiologist, USAF officer, and a great human being.

I will always remember him as one kind soul, smart, and funny.

Rob and I were stationed at Wilford Hall Medical Center as two young Audiology Lieutenants. We were promoted to Captain about the same time.  He had a great sense of humor an had an affinity for hot food (bottle of Tabasco in his Audiology booth).  I remember Rob having enormous compassion and skill when it came to his profession. He expressed great interest in taking care of his patients and was never afraid to take on another chart at the end of a long day.  Rob was a great Audiologist.

We became good friends.  I recall us going on a challenging backpacking trip with a group of guys from Lackland AFB in the mountains of West Texas.  I remember smoking cigars and drinking beer (good times).  Rob was at my wedding.  Once I returned form an overseas assignment and I had him meet me in Colorado to do some hiking and we drove down to a MASC meeting in ALBQ, NM.  That was a great road trip!  We talked about all kinds off stuff.  His perspective on any topic was fresh and fascinating.  A brilliant guy!

Rob you are greatly missed!

People cross our paths and enter and exit our lives, most without leaving a significant impression.  Rob Pluta didn’t fit into that category.  Maj (USAF, Ret) Robert Pluta left an impression on people across the military and in the communities where he lived, yet many had no idea of his impact.  He generally operated behind the scenes.  He left an impact on me personally, as he did for so many others who were fortunate enough to know him.

It is hard to imagine now, but in the mid-90s, sharing, saving, and posting digital information was in its infancy.  Rob was an early adopter of IT, and he really had a knack and an interest in computers and all that they can offer.  For those involved with MAA, I challenge you to remember a time that Rob (until his retirement in 2009) wasn’t our “webmaster”, spending hours of his free time updating, archiving, modernizing, and streamlining our MAA website.  He took on the task willingly, and kept it for at least 15 years, by my recollection.  Rob was a Geek before we knew what a Geek was and we loved him for it!  As one looks around the current MAA website, it is possible to find archives that date to 1996 showing early meeting summaries from the Air Force Audiology Association, then later merged with Military Audiology Association, then finally linked to AVAA and JDVAC.  Rob meticulously archived our history online.  I don’t recall Rob ever serving in an elected capacity in any of these organizations as that wasn’t his style.  I believe he shunned the spotlight and didn’t relish public speaking.  However, he used his talents where they were most needed, keeping all of us, our leadership, and the American public informed on the proceedings of the MAA.

I never had the opportunity to work with Rob on a daily basis in the clinic.  Others will likely write about the professional side of his life.  I’d like to share some about the personal side of Rob Pluta.

Rob had many interests in addition to techy gadgets, chiefly, all things music.  Prior to earning his Master’s Degree in Audiology, he played clarinet in the USAF Band.  He said he realized he couldn’t easily support a family in that capacity, so returned to school, and ultimately was accepted as an officer in the USAF.  His love for music never left him.  He was involved with community chorale groups both in Oklahoma City and Corpus Christi.  He listened to all types of music, and I never knew what he’d recommend – a classical piece or some undiscovered indie performer.  His tastes were wide-ranging.  His Facebook posts document his varied interests, and allowed his friends to enjoy the musical ride along with him.

Rob had two sons, one with special needs.  I adopted a child with special needs and perhaps that was the basis of our deep friendship, at least at the beginning.  I was struck, year after year, when Rob and I saw each other at MASC (later JDVAC) how he would always remember my daughter’s name and ask me to tell him how she was doing, things difficult to discuss over email.  His care, concern, and empathy were evident and much appreciated in a world where so many ask “how are you?” but don’t wait for the answer.  Rob truly cared.

We retired within a month of each other, we both went on to work for the VA.  We shared stories about “life after” but our regular meetings at JDVAC fell away.  Though I hadn’t seen him in several years, we had planned to coordinate attendance at a meeting in the future.  We shared texts and messages just a few weeks before his death, and he was very excited to move to a new position, still serving veterans but in a different capacity.

Rob will be missed by so many people.  His quirky sense of humor, his smile, his kindness, his love of music, his deep love for his family and his fellow man, his dedication to audiology and the patients we serve were just parts of the man.  Even in death, I believe he is serving others.  As I sit
writing this, the news of his and his son’s death has been picked up by national news, The Weather Channel, major newspapers in Dallas and the southwest, as well as local papers in TX and NM are reporting on the heat danger.  Their deaths are educating and warning others.  Their deaths serve as a stark reminder to how quickly things can go bad due to weather, how tenuous life is, and how quickly our lives can be changed forever.

“Our dead are never dead to us until we have forgotten them.”  George Eliot

Robert Pluta will live on in countless hearts and minds.

Rob worked for many years as the MAA webmaster, providing input and updates
throughout the year.  He was a gentle soul, quiet yet funny.  Although not
required of him, he attended almost every MAA meeting and we could always
count on him for historical information, which was invaluable to an
organization that rotates positions on a regular basis.  The MAA is deeply
saddened by his loss, he and his much-loved son will be missed.  Our prayers
go out to his family.

“I interacted with Rob mostly in my role as Associate Corps Chief and socially at our MASC meetings.  He was a kind and gentle soul.  His ever present smile was the evidence of a wonderful whit that amused and put people at ease.  As an officer, he was an example to all, always ready to do what was needed.  I miss him greatly and am so sad that he and the son he loved are no longer with us.  I will keep praying for his family and friends in this terrible time.”