Elizabeth (Betsy) Guild moved to Baltimore in 1927 when her father, Dr. Stacy R. Guild became Director of the Otological Research Laboratory at Johns Hopkins University Medical School. After obtaining a Bachelor’s Degree in Clinical Psychology at the University of Michigan in 1939 she worked in her father’s laboratory, which may have been the most important schooling for her career. 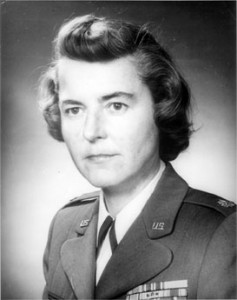 In July 1942, Betsy was selected for the first class of the Women’s Army Auxiliary Corps and served during the war in the Army Air Forces in the South Pacific Theater where she acquired her high interest in aviation. Following the war she briefly resumed her work at Johns Hopkins before returning to active duty in 1947 with the idea of applying her interest in hearing problems to her war-time acquired interest in flight. She worked in the School of Aviation Medicine, Department of Otolaryngology in San Antonio, Texas for five years as an enthusiastic teacher and investigator of biomedical problems of Air Force flight crews.

In 1952, Betsy came to the Aerospace Medical Research Laboratory, Wright-Patterson AFB, where she spent the next 15 years concentration on investigations into operational noise and voice communication problems. As Chief of Biological Acoustics, she contributed immensely to the development of adequate ear protection and voice communications systems, studies of individual and community response to noise, of the sonic boom and of rocket noise. Few individuals have personally experienced the first-hand knowledge of so many different noise environments to determine their impact on performance and safety.

Betsy earned the rank of Lt. Colonel while assigned to the laboratory where her outstanding efforts in solving noise and communication problems for flight and ground personnel became legend throughout the Air Force. She personally pioneered hearing conservation before before it was accepted policy by the Armed Services, government, or industry. She was often sought out to provide extensive consultation to other factions within Department of Defense, FAA, NASA, national and international standards, as well as academia and industry. In 1966, Betsy was elected a Fellow of the Acoustical Society of America for her unique achievements.

Betsy’s courage and dedication were exemplified by innumerable events, many involving very high personal risk, that include her voluntary participation in test flights of new aircraft, as a subject exposed to noise levels above 150 dB that were limited by non-auditory effects, and to sonic booms from supersonic aircraft flying a mere 100 feet over head.

She was always active, critically constructive and helpful on all projects targeted to combating noise and its adverse effects on people.

In less than three decades, Betsy’s pioneering efforts pointed out many existing and potential problems of aviation acoustics and noise that have finally become generally, if not universally, recognized and gained national and international significance. This is an important part of her legacy to the acousticians, pilots, maintenance personnel on the flight lines, communities near airports, and all other elements of aerospace operations, both civilian and military, both in the US and abroad.

LtCol Elizabeth Guild retired from the Aerospace Medical Research Laboratory at Wright-Patterson AFB in 1967. On 2 October 1971, Betsy died after a long illness.